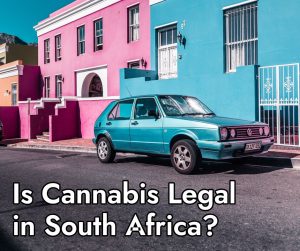 Listen to it on PodCast or Watch the YouTube on Is Cannabis Legal in South Africa. 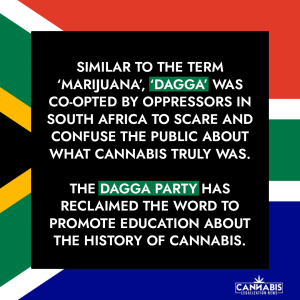 ​What is the Dagga Party?

“Dagga” is the Afrikaans term for cannabis.

“Just like in America, the word ‘marijuana’ was a local, colloquial word used by Mexican people which then the oppressors took on in order to disguise what the plant really was – everyone didn’t know that marijuana was cannabis. South African oppressors used those same tactics. The word ‘ga’ in Afrikaans in South Africa is an expression of disgust. ‘Dagga’ became a very disgusting emotional word for everybody. The press loved it, the police loved it. But now we’re taking that word back for our own purposes. Whenever they report on us they must say ‘dagga’” – Jeremy Acton, Leader, Dagga Party

Is cannabis legal in South Africa? Well, consumers are allowed to grow cannabis on their private property for personal consumption but you might run into trouble if you consume outside of your residence. South Africa’s climate is one of the best for Sativa strains. Watch this conversation about growing cannabis in South Africa.

The South African lawmakers are yet to formally legislate regularizing the consumption of cannabis. However, they have until September 2020 to bring in the legislation. A constitutional court in South Africa had ruled in September 2018 that the country must have in place a suitable law to regulate the use of cannabis. The court had given a timeframe of 24 months for this to be done but that has not happened so far. South Africa may have a law before September 2020. As of now, people are allowed limited access to cannabis for personal use.

How Can Someone Consume Cannabis in South Africa?

Anyone desirous of consuming cannabis in South Africa has to be 18 years or above. They can cultivate the weed in limited quantities for personal use. They can then extract the CBD oil or other products and consume them. The purpose can be medicinal or for recreation. However, this has to be carried out within their residential premises and a closed group.

The larger point to be noted here is that there is no commercial exploitation of cannabis in the country. This means you cannot buy and sell any of the products. You grow, you process and you consume while sharing it with a limited circle of family and friends. That is all. Anything beyond that is illegal. Law enforcement can take action if any of these are violated.

Are There Any Exemptions to These Restrictions?

The government in South Africa had issued an order a year ago, in May 2019, which says that cannabis products meant only for medicinal purposes can be sold and bought. This is the definition of using it as a medicinal product or health supplements:

a) the daily dose of cannabidiol or CBD cannot exceed 20mg, and

Interestingly, this exemption, as published in the Government Gazette dated May 23, 2019, was only for 12 months. That period will soon be over. It is not clear if the government will withdraw this exemption or extend it beyond May 23, 2020.

The Role of SAHPRA

The confusion among those involved in the business still prevails. If cannabis products can be sold for use as health supplements, will the authorities permit growing the weed on a large scale? After all, if the demand grows and more products have to be manufactured, growing it on a large scale will become essential. There is the regulatory authority, the South African Health Products Regulatory Authority (SAHPRA). This body has to be approached if you need the license to manufacture cannabis products.

It has to be noted that SAHPRA and the Department of Health can prescribe a lot of stipulations even while granting the license. It is not one of those cases where you apply for and obtain a license and go about your activities. There will be rigid standards applied for each stage of the process, whether it relates to manufacturing or its marketing. SAHPRA can limit the area and quantity of cultivation as well.

The regulatory authority reserves the right to carry out inspections of your premises to ensure their conditions are being followed.

The Future of Legalization in South Africa

As things stand, the COVID-19 pandemic and the lockdown imposed has meant that no fresh licenses are being handed out by SAHPRA for now. On the legislation as mandated by the Constitutional Court, it is reported that there is a law being drafted and it may be called “Regulation of Cannabis Bill’. A bill has since been drafted by the Ministry of Justice, South Africa and is in circulation among the various stakeholder departments within the government.

The South African government is looking at the cannabis industry as a source of revenue for the government. As estimate says, the business in the county could be worth around $23 billion in another three years. That may spur the action on bringing in a comprehensive law for the entire value chain, from cultivation and manufacturing to distribution and retailing.

The South African government is a signatory to the international conventions dealing with narcotics and psychotropic substances. It will have to do the fine balancing act of staying within these conventions while allowing limited consumption of cannabis. The country may have to follow what many states in the US have done; make the use of cannabis legal in South Africa but for medicinal purposes only.