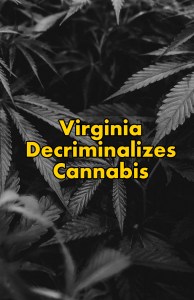 “This means close to 30,000 people a year will no longer be labeled as criminals and no longer will suffer the negative repercussions of a criminal conviction,” said Sen. Adam Ebbin, D-Alexandria,

Great news, everybody. Great news. My name’s Tom, our start YouTube channel. And you could find me by Google in Canvas Lawyer and then go to my website canvas industry lawyer dot com. And I’m like resource for questions about the legal cannabis industry, which are front on all over the place and constantly evolving. Case in point, constantly evolving. We have Virginia, and so Virginia just decriminalize marijuana. And this is a new article. It’s from April 13th Vox magazine and it’s the governor announced he signed the bill, so that kind of leaves us toe say alright, well, being that they’ve actually already legalized or decriminalized cannabis or marijuana or whatever it is referred to as in Virginia.

Back in March, both houses in Virginia voted to decriminalize, announced or less of marijuana and give it a smaller penalty even smaller than we did here in Illinois. So let’s talk about this one really quickly. This is both. These links will put down into the description section on this video so you can check eyes to the status of Virginia. If this is your state and if you are from Virginia, please tell us in the comments and the share this with people that you know in Virginia so that they can get on top of cannabis legalization news in Virginia because it appears that this is how it kind of ghosts you see after you have decriminalization usually have medical or medical, and decriminalization usually come onto the scene at the same time. In Illinois, we had 2013 medical, but that was implemented until 2015 into 16 de criminalized, and we only decriminalized 10 grams, only 10 grams.

How much cannabis did Virginia decriminalize?

They did a lot more than 10 grand, I believe they did. Up to an ounce, up to announce. There it is. The bill sets a $25 civil fines, possession of up to an ounce of the plants where products arrived there, from including hash and oil concentrates, which is quite fascinating and broad. That means that this but now I do have a medical card. But then, uh, this is a gram of concentrate in that big head. And so, uh, you can have an ounce of that. That would be ridiculous. But I’m not sure there’s any type of conversion that they do like they do here in L. A boy. It’s a good thing. It means that no longer 30,000 people a year, they won’t be arrested. There will be labeled criminals anymore. And that was a quote from Senator Adam didn’t who’s a Democrat from Alexandria, and he carried the legislation in the Senate. So this is quite exciting, and let’s kind of zoom in a little bit so you can see what the vote breakdown was. And hopefully there’s a bill in Virginia for medical cannabis. Or maybe I already have and check on dhe.

That’s fine… wait awesome. I just hope that they do methodologies of legalization to lower the barrier of entry, which can be substantially high, like $50 million high as low as possible while still having barely regulated So we’ll still be fairly high borders to entry. And so here’s the actual vote on what they did in the past it. So it passed in the House of 35 56 to 36 in the Senate, a 27 to 12 and that go Ralph Northam, who study would sign it, and he did sign it. So that means that goes into effect on July 1st, making Virginia 26 states. You either decriminalized or legalized the drug for recreational use. Now, that really kind of means that, uh, an ounce or so of cannabis will be fairly legal, or at least not criminal in Virginia, which really means that there’s probably gonna be bored gifting. But I don’t know. I I don’t recall the time that one of the people that I bought cannabis from on the traditional market, as many likes to call it,

Don’t forget to subscribe to get noticed of Cannabis legalization. News comes on Wednesdays, of course, at two Uh, we’ll see you on Wednesday. We have a canvas distributor from California joining us this time, so hopefully you guys stick around for that with great news. Virginia has de criminalized cannabis, and then the more great news for a future episode of cannabis legalization news.

Virginia wants to legalize cannabis in 2021!

They hope to take up legalization next year, and that’s the same even senator, even in, uh, the Virginia State Senate. So very exciting. I can’t wait to see what happens next in Virginia or even in your state. Let us know which states that you’re really, really interested in in the comments. And hopefully you guys are all enjoying life under the dome till next time we will see you on.