Can You Bring Weed On A Plane? 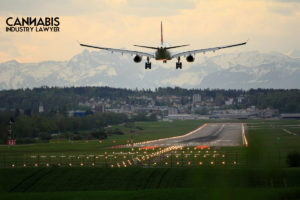 If you are going to fly and plan to take weed with you, you should be aware of the regulations that could apply to you. The first and most important question you should ask yourself is: can you bring weed on a plane? The Transportation Security Administration (TSA) is the organization in charge of the security of the traveling public in the United States. They are the ones that run the security checkpoint where your carry-on luggage is screened – they also check luggage behind the scenes. However, it would be inaccurate to say that the TSA is part of law enforcement. They are responsible for aviation security, and they are -usually- looking for weapons or explosives. In fact, in an Instagram post on the TSA’s official account, they clarified that screening procedures are focused on identifying potential threats to airport security, so TSA officers do not specifically search for marijuana during the screening process. However, that doesn’t mean they won’t find it. TSA screening procedures regularly reveal drugs of many types. The important question is, can you bring weed on a plane with you?

Can I fly with marijuana on my luggage?

The short answer is no, you can’t fly with marijuana. In fact, carrying weed onto a plane is a federal crime. The reason behind this is simple: marijuana is a schedule I substance – which means it is illegal under federal law- and federal law governs airplane travel in the U.S. This is because the airspace is considered federal territory, so therefore marijuana can’t come on your flight. This prohibition includes flying within states where pot use is legal or between states, because although most airports are owned by local or state bodies, many airports receive federal grant funding for maintenance and improvement. This implies that the airport’s owners, whether private businesses or state governments, have additional responsibilities to the federal government and may be less indulgent in the event of federal law infringement. In most states where marijuana is legal, carrying the allowed possession amount of weed will only end up in the TSA officers confiscating it for disposal, however, it’s better to not take that risk.

What happens if the TSA finds marijuana in my luggage?

As we mentioned earlier, the TSA is not looking specifically for marijuana on your luggage, however, if they do find it, the TSA will enforce federal laws – as the TSA is a federal agency. This means that if they do find weed in your luggage, they must report it to the police, and from there it is up to the police how they will handle it. In states where marijuana is legal, they will most likely confiscate it for disposal. You may also be asked to get rid of it before you board or be simply waived. At the end of the day, it is up to the officers to make those decisions. There are some airports, like LAX or O’Hare which have publicly announced that they will not be stopping any outbound passenger carrying an ounce or less of marijuana. Prominent airports, however, are now equipped with “pot amnesty boxes”, which are in place for travelers that don’t want to risk breaking the law by flying with a cannabis product.

Can you take CBD oil on a plane?

The TSA states that you can take CBD oil with you as long as it contains no more than 0.3% THC, or a quantity approved by the FDA. However, if the CBD is liquid or food you must take into consideration the TSA carry-on policies.

Can you bring edibles on a plane?

It will depend on the type of edible you are trying to bring. As we mentioned earlier, any cannabis product that has a concentration of more than 0.3% THC is federally illegal, so you can’t bring any cannabis edible if it surpasses that limit. However, you can bring cannabis-related products as long as those contain no more than 0.3% THC.

Bringing CBD oil in your luggage

If you are packing CBD oil in your carry-on bag, the best option is to pack it in your quart-size liquids bag and only bring under 3.4 ounces. You could bring liquid medications in containers larger than 3.4 oz, but you would need approval from an TSA security officer to do this, which would involve additional screening on your product. In theory all CBD products are legal -as long as it doesn’t breaches the 0.3% THC concentration threshold- and you should be able to bring them on to planes. However, you should be careful trying to fly with CBD flower buds, as they can be mistaken for weed – the TSA can’t test your CBD at the checkpoint for THC levels, so they would rely on the packaging. The same rules apply for bringing CBD in a checked luggage; however, it’s worth noting that you can’t fly with a vape pen for CBD juice in your checked bag. The reason behind this is because of the risk that the battery can catch fire. Vaping devices are required to be packed in carry-on bags.

Flying internationally with CBD oil or other cannabidiol products

On domestic flights in the United States you can travel with CBD oil and other cannabidiol products if the THC content is below 0.3 percent. CBD oil containing THC above 0.3 percent is illegal under federal law. If any illegal substance is discovered during security screening remember the TSA will report any suspected violations to a law enforcement officer. As the TSA won’t test your CBD at the checkpoint, it’s best that you travel with CBD products that have their THC info on their label clearly visible. However, if you are traveling with CBD products internationally then you need to check the laws for your destination country, as a lot of countries don’t allow the possession of cannabidiol products. If you need counseling on the cannabis industry, do not hesitate to contact us, and also don’t miss out on our Marijuana Legalization Map where you can browse the current status of laws in every state in the United States and see all our posts on each of them.