Black-owned dispensaries and businesses need support because it’s obvious – the cannabis industry is disproportionately run by white people. According to BuzzFeed, in 2016 of the 3,600 dispensaries only 1% were owned by Black folk. If legislation doesn’t give black and brown people a fair chance to own a cannabis business (though some states are trying), it becomes our duty to support those who were disproportionately affected by the War on Drugs. But don’t think about supporting Black-owned dispensaries just for Black History Month. Some consumers exclusively buy from black, POC, women, or LGBTQ operations. Supporting black businesses fosters job creation, strengthens local economies, and helps close the racial wealth gap. This week Tom and Miggy were joined by Seun Adedeji, Founder and CEO of Elev8 Cannabis, to discuss being a young Black entrepreneur and owning a cannabis business. In addition to being a DACA DREAMer, Seun Adedeji is the youngest Black man in America to own a dispensary. 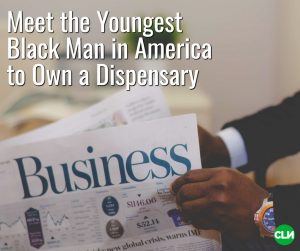 What is Elev8 Cannabis?

How Old Were You When You Started Elev8 Cannabis?

“I officially opened at the age of 23, I started at 21. It was a process going through the regulations are reading through everything especially when you don’t have enough capital and you’re underfunded. I tell people I was the COE which means the Chief of Everything. I legitimately did everything, I was my lawyer, my CEO, my CFO, whatever you want to call it I did it. It was hard but I was passionate, determined, had a lot of hustle, and didn’t know how to take “no” for an answer.” – Seun Adedeji

How Much Capital Did You Start Elev8 Cannabis With?

“I only had $50,000 and a dream. I slept in my shop for a whole year, I hammered everything in, I installed the cameras, I did everything. The second hurdle though was securing product in a market when you’re under capitalized. I emailed everyone I could to cultivate relationships and get products on the shelves. When we first opened up we had only 12 flowers to sell and super empty display cases. I knew if we didn’t open uo we were going to go out of business because I ran out of money. We marked up the product, I slept in my shop, but we got it done.” – Seun Adedeji

Seun Adedeji, The Youngest Black Man to Own a Dispensary in America

As a young entrepreneur, Seun Adedeji is changing the cannabis industry for better. He moved to the USA when he was 3 years old, and now, at 26, he is the youngest black man to own a dispensary store. How is this possible? With a lot of patience, struggle, and dedication. Seun is an example of how a real American spirit can lift the entrepreneurs of all ages and races to follow up on their dreams and reach their business goals.

What Challenges Do Black Men Face in the Cannabis Industry?

Black-owned dispensaries and other cannabis businesses see the same obstacles as in any other industry. Black men and women, Latinx people, and minorities are still not in the business in the right way. It is a matter of sociological and political obstacles we need to overcome.

Today, in the state of Massachusetts, only 3.1% of marijuana businesses are owned by minorities. However, they manage to change the situation for better by introducing alike people to the industry.

Seun Adedeji is an example of how a young man can go through all the barriers on the way. He wanted to present himself as an entrepreneur who had motivation and persistence to reach the highest goals in the marijuana business. And he succeeded.

Nowadays, he represents the minorities in a way that is far more than encouraging. Seun tries to teach and guide other people on how to believe in their vision on a path to business success.

What Are the Future Plans for the Youngest Black Man in the Cannabis Industry?

Black-owned dispensaries like Elev8 Cannabis are looking to scale. In the future, Seun plans to open many more dispensaries in different areas, but, at the moment, he needs to wait for the right opportunity. He already signed a contract with TILT Holdings which is a multi-million dollar expansion deal. If everything goes by the plan, Seun will soon become a man with multiple marijuana businesses.

Seun’s Elev8cannabis company is expanding in many ways, and he already can offer many products that are purposed to “meditate, recreate, and elevate”, as he suggests. Many consumers are already faithful followers of the company news.

If this young man continues to change the business environment for better, we will see many positive changes. Now, it is clear that some groups of people have many difficulties in finding their way of success. Regulations, discrimination, and racism are still visible in some business areas.

However, the future brings us much positive news. Many black people are already in the process of getting their licenses, and the situation is changing for the better. They all can follow the example of Seun Adedeji who showed us how a hint of commitment and dedication changes the way we see the world. It is the right and obligation for many.

In an environment where many of us don’t believe in success, we look for people like Seun Adedeji to give us the motivation to change our lives.

The youngest black man in the cannabis industry has a message for all of us. Stay elev8ed and bring your best potential to the table. His Elev8cannabis company is an example of real business success based on overcoming all the obstacles along the way.